Park your car at College street from 6pm onwards and get the full amount redeemed.

When you think of a curry what comes to mind it is a nice cold draught beer. That is the general outlook people have towards Indian curries. But It may come to surprise for some that beer is not the only drink that pairs well with a curry. In fact cocktails can match perfectly with any curry, you just need to know which one to choose according to the ingredients that best go with your food.

Consider cocktail instead…
What about a mojito dashed with a Bacardi or a Love from Delhi with Plymouth and Chambord? Or a mango strawberry daiquiri with rum? Or even our aromatic Lychee Martini with Vodka?
Let’s explore in more detail how cocktails can be an out of the ordinary but a very refreshing and delightful choice that can bring out the flavours and cool down the upshot of the spices.
Many cocktails would complement different dishes whether with lamb, chicken, fish and vegetables.

Let’s start with the meaty lamb dishes. Lamb is full of flavour, it has a robust pastoral rounded taste and it is lightly sweeter than chicken so for these curries we would recommend a rum based cocktail. Why not try a Rajasthani lamb or a Laal Maans or even a keema mutter with our signature Peruka Breeze containing rum and guava juice to refresh your tongue? Or maybe a Mojito with Bacardi Rum, lime and mint leaves to give that subtle relief from the tang? Our Mojitos come with a fruity flavour with a choice of raspberry or strawberry to add that reminiscence of summer in the air, even in the cold snowy winter days. Also a Disaronno would complement a lamb dish perfectly because it has that almondy sweet taste. Ask for a Disaronno Fizz with lemon and soda to our in house mixologist to finish off your meal!

Chicken or fish curries curries with cocktails
And what about chicken? Being quite different from lamb in taste, chicken curries are best coupled with gin and vodka or even a Martini. So you can match our Murgh dishes like Methi Murgh, Murgh curry or a Murgh Qorma with one of our signature Martini cocktails like a French Martini with a dash of High grade Vodka in it.
And what about Indian fish dishes? Our pomfret or a banana leaf wrapped Pollichatu would match with a dry gin or a vodka inspired cocktail, as they would with a Pinot Gris or a Sauvignon Blanc.

Vegetable dishes
Vegetable dishes in India are a staple food with an aromatic basmati rice or a roti or a naan. Lentils like a creamy Daal Makhani or Tadka Daal pair well with tangy cocktails containing ginger ale or take a pindi chole or an aloo gobhi with a gin tonic with mint and lime with a thin slice of ginger.

Our ambitious wine selection…
Apart from cocktails wines are a great match for curries too! For those who are more traditional and not very adventurous, wines represent a great option when it comes to Indian cuisine.
Vegetables can be coupled with an earthy red like pinot noir with a hint of spices. Try our Dal tadka or Dal Makhani or even an aubergine bharta with our Red Pinot Noir from the foothills of the Pyrenees.
Lamb curries or lamb chops are perfectly coupled with robust well-rounded reds like malbec or a shiraz, or a mellow cabernet sauvignon.
Undoubtedly all chicken dishes pair well with a red fruity cabernet sauvignon from Chile which is well combined with all the spicy dishes.

And finally fish…
Fish tapas match with a Belvino pinot grigio rosato slightly dryer in style, full of fresh summer berry fruit aromas, still a nice option from our menu if you like fish. Sauvignon blanc from Chile or a white corte vigna pinot grigio and The Beautiful Lady white from South Africa (gewurztraminer) are exceptionally well paired with Indian style cooked fish and with spicy Asian cuisine in general thanks to their off style.
Whatever item you choose from our mouth-watering menu, we will be happy to advice the best cocktail or wine from our ambitious and extensive selection of drinks.
Welcome to divine dining, only at Namaste Delhi!

Samosa Chaat, sensationally appetizing There is much more to Indian food than just curries. Samosa Chaat is the culinary proof of this statement. When I first went to India I was tantalised by all the amazing flavours, aromas and spice sellers on the streets. I wanted to totally immerse myself in this ocean of new scents, colours and completely unique flavours. When I tasted Samosa Chaat for the first time, I was absolutely ravished. So let’s dive into this iconic […]

Afternoon tea for one £18.95 and £34.95 for two! If you are looking to enjoy your classical afternoon tea but you are in the hunt for a notch more, then you can stop searching! With its pioneering concept of afternoon tea, Namaste Delhi is ready to delight customers by putting on a show with a carousel of flavours and colours right in front of you. We can proudly say to be the only Indian restaurant in Aberdeen to propose this […] 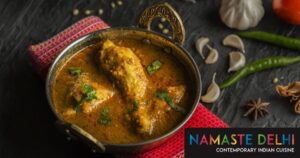 This is one of the favourite specialties at Namaste Delhi! Creamy and aromatic is one of my favourite Indian dishes.
Finding its roots in the Mughal cuisine, Murgh Korma can be traced back to the 16th century and to the Mughal incursions into the region. Kormas were often prepared in the Mughal court kitchens and it is said to have been served to Shah Jahan and his guests at the inauguration of the Taj Mahal.

The recipe differs from North to South, although usually the gravy in korma is very mild. For example in northern India the korma is a mild yet spicy white curry but in Southern India a korma consists of a tomato based gravy which is very hot and spicy.

In the ancient times Murgh Korma was cooked using mud pots over a ‘chulha’ (a mud stove, with wood as fuel, usually found outside the house). Even today, most rural population in India still continues to cook like that but it is not possible in the crowded cities as most people live in buildings, therefore it would not be practical.

At Namaste Delhi we have our own signature Murgh Korma, best enjoyed with a naan or a rice dish, so order yours tonight and dive in the flavours of India!
Some of our sources: https://www.creative-cooking-corner.com/chicken-korma.html, www.wikipedia.org
Disclaimer: The information provided has been well researched and written from many sources available online and the views provided is not of Namaste Delhi. Namaste Delhi do not take any responsibility for any technical error in the article.
CONTENT BY LANGUAGE TUTOR4U

Dal Tadka and Dal Makhani: from humble origins to icons of Indian cuisine 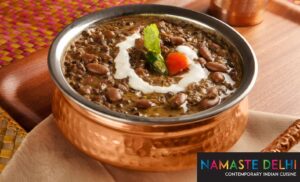 Both iconic dishes of the Indian subcontinent, Dal Tadka and Dal Makhani are considered humble ambassadors of Indian cuisine. They are both smooth, spicy, simple and considered Indian staple food. But what is the difference? Let’s explore the origins of these two symbols of north-Indian cuisine.

Dal Tadka is made with yellow lentils (usually moong dal but you can also use toor or masoor). Dal Tadka is a very ancient dish of the Indian cuisine. Ancient Indian texts describe recipes of dal that were served to guests at celebratory meals. It is believed that special dal served at Chandragupta Maurya’s wedding back in 303 BC. was the precursor of ghugni – a lentil preparation that is still very popular in east India and it is often sold in street side shops as a breakfast option.

On the other hand, Dal Makhani is made with black lentils (urad dal) and red kidney beans (rajma), in fact the dish can also be called Rajma as it is one of the main ingredients along with butter and cream (makh meaning butter in Hindi). It originates from Punjab and it became popular during partition in 1947 (division of India and Pakistan).
It is thanks to the creativity and culinary flair of the famous chef and restaurateur Kundan Lal Gujral, founder of Moti Mahal restaurant chain, that we can enjoy this exquisite creamy and velvety delicacy today.

Still considered an Indian staple food today and  excellent gluten free choices, these lentil dishes transform any dinner into a feast. Accompany them with a naan or rice to complement the powerful tangy aroma and enjoy!

Namaste Delhi strives to replicate the same traditional taste and flavour of homemade Indian food. Come and try it out for yourselves!

Some of the sources used for this article: www.wikipedia.org, food.ndtv.com, www.differenttruths.com, www.google.com

Railway Lamb curry, a renowned iconic dish of Indian cuisine, still surprises us today for its simplicity and for its robust spicy taste. But why is it called Railway Lamb curry? This special dish finds its roots in the colonial era when in the late 19th century and early 1900’s, the chefs used to cook on the railways during long journeys on the trains.

It actually started in the far 1857, when an engineer called Robert Maitland Brerenton was ordered to build the most extensive network or railways all over India to connect this huge and amazing country from end to end. It was meant to facilitate commercial exchange but mostly to speed up otherwise exhausting and endless trips up and down the country.

Little did they imagine that the 6,400km network would have a high impact on the hospitality industry, but also it was a milestone in creating culinary memories for both British and Indians alike for generations. In fact, as the railway journeys were very popular among the British upper classes, the trains were fully equipped with restaurants, chefs, butlers, waiters ready to serve and impress the aristocratic British colonialists.

It wasn’t until the Frontier mail (Golden temple mail after independence), that the restaurant on wheels upped its game with inimitable recipes and luxurious facilities such as shower, bedrolls, and even a steam room! Inaugurating its journey in 1928, it used to connect Bombay to Peshawar, in the North west India at the time (today in Pakistan).  The Golden temple mail still runs today from Mumbai (Maharashtra) to Amritsar in Punjab where, thanks to the Golden temple, takes its name.

Since then Railway lamb curry has kept its name in memory of the colonial era and it is still enjoyed by all until today…on wheels or not!

The Allahabad-Jabalpur branch line of the East Indian Railway that opened in June 1867 was the first of Brereton’s 6,400 km rail network. Officially opened on 7 March 1870, it became the inspiration for French writer Jules Verne’s book Around the World in Eighty Days.

Some of the sources: www.indianexpress.com, www.wikipedia.org https://economictimes.indiatimes.com   www.google.com

For other posts on spices and food, visit our articles on: Turmeric, Cardamom  Dal tadka and Dal Makhani,