Park your car at College street from 6pm onwards and get the full amount redeemed. 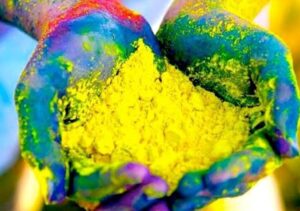 Holi, symbol of life and Spring!

Holi is celebrated in India and all over the world but what is the meaning of this colourful celebration?

Why people throw colours at each other, or lit bonfires?

The meaning is all hidden in the legends that surround this beautiful festival.

They celebrate the good over evil on the first day of Holi and the second day is the celebration of love, Spring and new life. It is celebrated as an event that leads the world coming out of the darkness of winter into the light and renewal of Spring.

It is usually connected to the God Vishnu as it also celebrates the love between Radha and Krishna who is the incarnation of Lord Vishnu.

The legend of Holika and Hiranyakashipu

Hiranyakashipu was a demon King and had been given immortality or…. sort of. Actually, he had been given five special powers which kept him from being killed under certain conditions.

He could not be destroyed:

by animals or humans

during the day or night

on land, air or water

by bullets or with handheld weapons.

Being indestructible, he started believing he was a God.  Whoever worshipped other gods other than him, was punished or killed.

Since Hiranyakashipu’s son Prahlad remained a worshiper of the Hindu god Vishnu instead of his father, the demon planned to kill his son because of this.

Hiranyakashipu bound his sister Holika into the scheme. By wearing a special coat that shielded her from fire, she took Prahlad into a bonfire. The plan involved killing Prahlad in the fire but instead her coat flew off and covered Prahlad instead, protecting him and killing her.

After having witnessed all these events, Vishnu was determined to put an end to this evil creature.

He smartly managed to bypass Hiranyakashipu’s five powers by:

taking the form of half-lion, half-human (so not animal or human)

arriving at sunset (not day or night)

showing on a doorstep (not outdoors or indoors)

placing the demon on his lap (which isn’t land, water or air)

It is thought that Holika gave the name to this festival and the reason why bonfires are lit during the first night.

The legend of Krishna – Why is it called the festival of colours?

According to this legend, Krishna was quite naughty. He did not use to like his dark blue skin and wanted to be fairer, like Radha. He was advised by his mother Yashoda, to colour Radha’s face with any dye he wanted. After this, They were still in love with each other, meaning that Radha was not accepted Krishna’s mischievous nature.

This maybe the reason why people today throw colours at each other during the second day of this celebration and why the festival represents the love between Radha and Krishna.

What is the powder used called and made of?

Gulal powder is used for various festivals but mostly associated with Holi and it is made of a mixture of more than 95% corn-starch blended with food and cosmetic pigments. The colours used have various meanings:

Green is the colour of spring, youth and new life!

Of course there are many more legends that surround this beautiful and traditional Indian festival but these are just a hint to the many stories there are regarding Holi.

Wishing you and your family a happy, colourful and loving Holi!

Some of the sources used for this article: