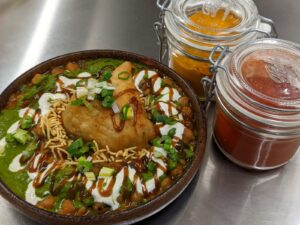 There is much more to Indian food than just curries. Samosa Chaat is the culinary proof of this statement. When I first went to India I was tantalised by all the amazing flavours, aromas and spice sellers on the streets. I wanted to totally immerse myself in this ocean of new scents, colours and completely unique flavours. When I tasted Samosa Chaat for the first time, I was absolutely ravished. So let’s dive into this iconic finger licking Indian street food, its origins and history!

We all know that Samosa chaat is a widespread Indian snack usually enjoyed on the busy chaotic streets of the Indian metropolis, but when we look deep into its origins we learn that it was not conceived as an Indian dish. In fact, its origins are rooted in Central Asia, the recipe was then reinvented by Indians who mastered a creation of their own with variations.  According to some sources, Samosa finds its origins in Egypt before finding its route to Central Asia.

In Central Asia, it was initially known as “samsa” after the pyramids in the region. Other historical references name it as “sanbusak,” “sanbusaj,” and “sanbosag.” Samosa has different styles in various parts of the world. For example, in Kazakhstan, it is baked and has a chunky and friable crust. Some of the fillings used in this region include onions, meat, pumpkin, and minced lamb. The Jewish make their samosas with mashed chickpeas.

Samosa is first mentioned in Persian texts dating back to the 9th century, as well as writings from the between the 10th and 13th century also mention its existence throughout the Arab world, We find that the basic ingredients are always the same: oil, butter, salt, dough, and warm water. A simple dish named in different ways but based on the same concept.

It is in the 14th century that the samosa we know today first makes its historical appearance in India. Travelling through Central Asia, merchants spread it across the Muslim world and it eventually found its way to the subcontinent under the name samsa, named after its pyramidal shape. The Samosa was taking the shape and recipe we know today, filled with meat, ghee, and onion.

From India, the samosa spread across many cultures and made its way to North and East Africa, as well as wandering to the Mediterranean and into Southeast Asia and even Polynesia. As the centuries passed, the recipe changed, and every region added its own style to the traditional pastry. Subsequently, these variations travelled back to India, where the samosa had already been altered and served with different formulas from state to state.

All this cultural and culinary influences have led to the extraordinarily varied and legendary samosa we all know and love today.

Let’s have a Chaat!

To make the amazing Samosa Chaat, a sauce called Chaat (literally meaning “To lick” as this is a street food  and it is usually eaten with no cutlery) is added and this is usually made with chickpeas, yogurt, tamarind and coriander chutney. This is a popular and simple street food in India, where cold and hot, sweet and sour are often blended together to positively surprise your palate.

At Namaste Delhi, we fill in our samosas with mash potatoes and green peas, perfectly crunchy on the outside, soft and a tad spicy on the inside, skillfully blended in the Chaat sauce: the taste and aromatic spices of Indian streets in a mouthful. Exquisitely scrumptious!

Check our signature Chaat recipe to try at home:

Some of the sources used for this article: